The developer's two brand-new developments were located in the Inland Empire, one of the areas hit hardest by the nation's housing slump. In addition, construction was being completed during the peak of the recession. Despite their remarkable quality, he knew selling his homes would be tough and ultimately decided that the LFC Group of Companies' Freedom Realty Exchange online auction-marketing program would be the best way to move his inventory quickly. 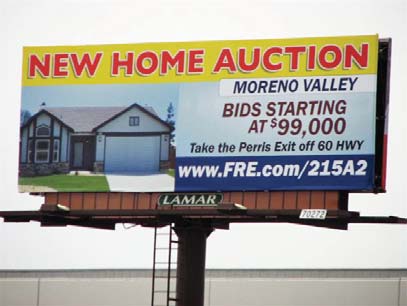 The LFC team quickly realized that these were two separate products, with two very different markets to attract. Casalingo Estates was an upscale, gated community of Tuscan-style homes; while the homes in Moreno Valley featured a smaller, entry-level product attractive to first-time homebuyers.

Immediately after the homes were completed, they attracted no prospective buyers for nearly three months, so LFC strategically placed auction signage near the two developments, grabbing the attention of the local market and driving homebuyer traffic to both locations.

The Freedom Realty Exchange auction marketing campaign produced more than 13,000 visits to the auction-specific web page on FRE.com, nearly 400 registrants and approximately 100 active bidders. The fervor of the bidders pushed the online bidding into Last Call®, extending the auction each day for two weeks until the bidding ceased on the fourteenth day. Gardner Construction & Development was delighted to sell its entire standing inventory of 25 single-family homes in less than three months.