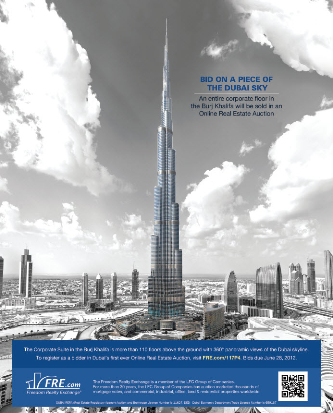 SUMMARY:The world’s tallest building, the Burj Khalifa in Dubai, is one of the most admired and highly sought after addresses for global business leaders. The owner of an entire corporate floor recently took a bold and historic step by putting the property up for sale on FRE.com in Dubai’s first ever online auction.

CHALLENGE:Despite the fact that the iconic building is one of the most appealing pieces of real estate in the world, successfully marketing and managing an auction for this office space was still a very tall order. One of the biggest challenges leading up to the auction was Dubai’s economy and an oversaturation of available office space in the region. The property had already been on the market for more than two years and was competing against several other vacant floors within the Burj Khalifa, not to mention countless other buildings with vacant offices throughout the city. Another obstacle was trying to gain the attention of global real estate buyers who literally had an entire world of inventory from which to choose.

IMPLEMENTATION:LFC thoroughly explained what they intended to do and how they intended to do it,stating from the beginning that it might take a while to find the right buyer, but that they would stay engaged and committed to the sale. The seller agreed to advance a modest advertising budget and LFC commenced the advertising campaign. Forty-five days later we reached the initial bid deadline and, although the property was shown numerous times, the two bids received were not acceptable to the sellers. Understandably, the owners were disappointed. LFC didn’t give up, but rather suggested to “roll” the campaign and do it all over again. The second time around, although the property was shown to several prospects, the end result was the same. LFC didn’t give up and proposed “rolling” the campaign again and changing the auction format from a “low minimum bid with a reserve” to a “no reserve” with a higher starting bid. 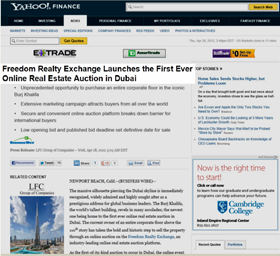 Regional and international advertisements about the property ran in high-profile media outlets such as the Wall Street Journal, Forbes and key in-flight magazines. Custom emails were sent to a broad range of investors and to the brokerage community. Direct mail was sent to members of the Arab Bankers Association of North America (ABANA). A press release was issued to all appropriate reporters throughout the region. A formal reception was also held for more than 100 attendees from around the world that included brokers, heads of financial institutions, high-profile business people and potential buyers. 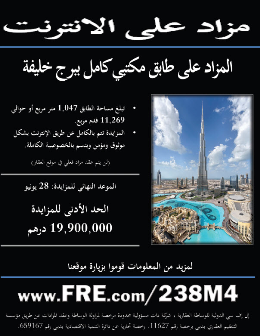 RESULTS:The third time was a charm. The LFC auction program produced an owner/user buyer who appreciated the historic nature and financial attributes of the building. They were able to close “all cash” in 30 days.

Altogether, the campaign generated over 25,000 hits to the event page and more than 160 registered prospects from 15 different countries. The highly successful marketing campaign created a foundation for online auctions as an alternative and viable solution for property owners and enabled a new generation of online real estate auctions to be conducted in the region.